What’s all this then? 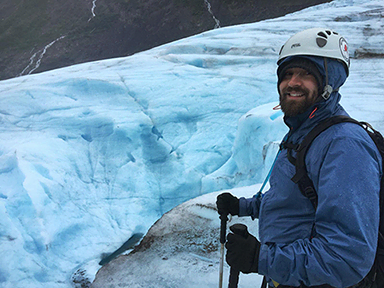 Me on Exit Glacier at Kenai Fjords National Park, AK.

My name is Samuel Robert Mathias. I’m a researcher at Boston Children’s Hospital. I’ve published numerous peer-reviewed papers on a range of topics, including hearing, psychology, psychiatry, and genetics. You can find my list of publications here or on Google Scholar. The Cracked Bassoon is my personal website.

I was born in Wigan, a medium-sized town in the North of England perhaps best known for its inaccurately named wharf and the voracious consumption of meat pies by its inhabitants. I recieved BSc, MSc, and PhD degrees from the University of York all under the supervision of Peter Bailey. The Sunday Times named York the best place to live in Britain in 2018. I was fortunate to spend about seven years there. After leaving the UK, I was a postdoc at the Max Planck Institute for Human Cognitive and Brain Sciences in Leipzig, Germany under Katharina von Kriegstein, and at Boston University under Barbara Shinn-Cunningham. Later I worked at Yale School of Medicine under David Glahn. I now work in the Department of Psychiatry at Boston Children’s Hospital (BCH).

Me back in 2009-ish operating an MEG scanner with Peter playing the role of participant.

I currently live in Charlestown with my wife, Emma Knowles. She is the superior scientist by every metric. Please check out her work. We have a goldendoodle named Charlie.

How I made The Cracked Bassoon

This website was built using Jekyll and is hosted on GitHub Pages. I bought the domain from Google Domains. I didn’t like any of the available Jekyll “themes” and don’t know how to build my own, so I styled it using plain old HTML and CSS, from a clone of Michael Cypher’s website. The logo is a 1950s black-and-white stock photo colorized using DeOldify. The typefaces used for the title and main text are Trocchi and Charter, respectively. The name comes from a fun but inaccurate description of iterated rippled noise, an auditory stimulus used in the early days of auditory fMRI research.

If my style of writing seems strange to you, it could be because I’m an Englishman who spends most of his time reading and writing American English. My own style has become a strange mixture of the two. I endeavor (not “endeavour”) to conform to standard US spelling and punctuation, but can’t resist a good British idiom from time to time.